Deleted Scene from Torn Away

This is a scene from Torn Away, available now, that was deleted. I always loved this scene, and so did the editor. However, she pointed out it wasn't needed and the novel would be tighter without it.

My original plan was to include it in book 2, however there just wasn't a place or space for it. Too much else going on. So I decided to share it with everyone on here. I hope everyone enjoys it! 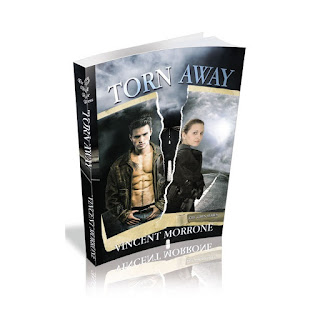 Less than two minutes later, the phone rang, dashing Ashley’s hopes of putting her feet up and watching the game. Ashley walked into the kitchen and grabbed the portable phone off the cradle on the counter near the toaster and can opener. Hitting the button to answer the call, she snarled into the receiver. “Yes?”

There was a breath on the other side. “Um…”

Ashley rolled her eyes. “Yeah? Say something or I’m hanging up.”

She winced as there was another breath on the other side of the line. In her mind, she started to count, thinking if she reached ten she’d hand up, knowing all along she would really only give it to five.

“Is Drew Duncan there?”

Ashley closed her eyes and sighed. Great, some idiot bimbo Drew’s probably been banging got the home number.

“He’s not here,” Ashley said. She heard the impatience in her voice, but didn’t care. She wasn’t in high school anymore and she wasn’t about entertain some dimwitted girl on the line just because she’d gone and fallen in love with her idiot brother.

“Um…” the young voice said again. Ashley physically winced. She sounded like she had the emotional maturity of a thimble.

“You want to leave a message?” Ashley said.

There was a hesitation and Ashley seriously thought about hanging up.

“I’m sorry,” she said. Her voice was shaky, nervous. “I know this must be a hard time. I just wanted to tell Drew… Well, I just felt I should thank him…”

Ashley pushed her hair back and sat down at the kitchen table. God, if this chick wanted her to thank Drew for banging her brains out, she was going to be sick.

“I uh… I just meant,” the girl stammered. “He saved my life and I never got the chance to say thank you.”

Ashley could hear the girl swallow at the other end of the line. “He got me away from those men. Got me back home. I tried to find him the next day, but they said he had to leave. A family emergency.”

Understanding finally dawned on Ashley. This was the girl the General told her about. The one who had been kidnapped.

With a much gentler voice, Ashley started to talk. “What’s your name, sweetheart?”

“My name’s Ashley. How are you doing?”

There was a hesitation on the other end of the line and Ashley imagined the girl was probably wondering if she was still talking to the same person.

“I’m alright,” she said. “It’s hard to sleep. I’m still worried they’ll come back, even though I know they won’t.”

Ashley nodded. “That’s right. You’re safe now. I know that can be a hard thing to adjust to. Just give it time.”

“Are you sleeping okay?” Ashley said. When Jen didn’t answer, she guessed the answer.

“There’s nothing to be ashamed of,” Ashley said.

“I know,” Jen said. “I’m not really having nightmares. Just problems falling asleep. I think I hear them coming for me. Every time I close my eyes, I’m scared they’re gonna grab me. Last night…”

Ashley heard a muffled sob from the other end.

“My brother,” Jen said. “His name is Jake. He came into my room and crawled into bed with me and told me he’d stay awake all night so I could sleep. And he did.”

Ashley smiled. “That’s sweet. He’s your brother and he loves you. He wants to protect you.”

Jen let out a sound that was half sob, half snort. “He’s only eight, but he’s taking care of me.”

“He’s your brother,” Ashley repeated. “That’s what they’re there for.”

Jen laughed. “Do you have a brother?”

Ashley cringed, less at the painful memory of Drew letting her crawl into his bed when she was afraid to sleep, and more at the fact she’d refused to think of that memory for so long. Nothing could seem to stop the images of Drew holding her when she was scared flooding her mind.

“Oh,” Jen said. Her voice got quiet again. “Someone told me he had a death in the family.”

Nodding, even though she knew Jen couldn’t see her on the other end of the phone, Ashley took a moment to wipe away a tear. “Yes. Our sister died. He found out just a little while after he helped you ran back home. I’m sure he would have checked on you if he hadn’t.”

“He called,” Jen said. “I wasn’t here, but he spoke to my mom. I just wanted to thank him and say that I was sorry. I should tell you too. I’m sorry.”

“Thank you,” Ashley said. “Tell me about your family.”

Ashley pictured a young teen girl, twirling her hair nervously as she spoke. She could see the scene of her curled in bed with her little brother, but as she did, the faces changed to hers and Drew’s.

As Jen continued to talk, memories flooded back. Fleeting images of Drew coming into her room. The room that always had a light on. Drew would often act like it was a hardship to be there with her and Kelli.

Jen continued to describe how life was different now that she had been rescued. It wasn’t just that she was scared all the time or worried she’d go to sleep at night and wake up to realize the rescue was a dream and she was still being held captive.

“I feel different,” Jen said. “I think about everything I used to think was important, music, celebrities, and I think most of it is just silly now. I’ve talked to my friends since I’ve been back. Seen a few. And they’ve been nice, but they just don’t… I don’t know…”

“They don’t get it,” Ashley said. “You were sheltered before. Now you’ve seen a very ugly part of life and you know it’s there. You lost something, and you have to accept there’s probably no way to get it back. You can still enjoy movies and music, but you know what’s out there. What you need to understand is, even though there’s a lot of ugliness out there, there are still a lot of wonderful things. And some silly things. And it’s okay to be silly. It’s fine to enjoy being with your friends and watching a movie, but you know the ugliness you saw is out there. You lost your innocence in a way, but in the end, you’re stronger for it.”

There was silence on the end of the line. Ashley could imagine Jen thinking about what she’d said. Maybe even wiping away a tear.

“I know,” Ashley said. “But you are. You just have to believe that.”